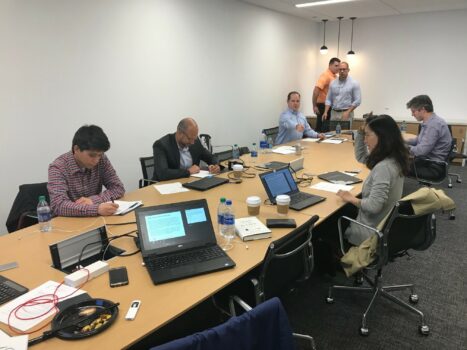 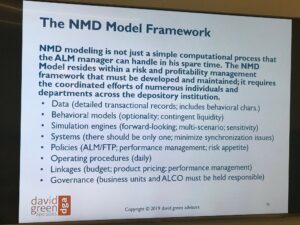 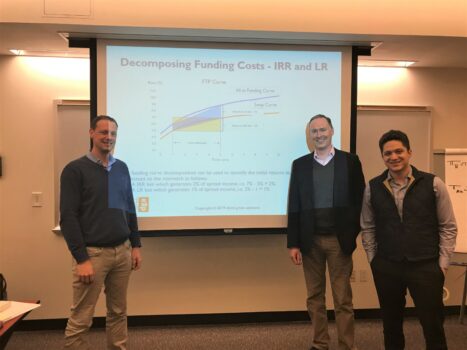 Are you ready for the next move in rates and liquidity spreads?

Thanks to Marcus Evans and the delegates to my recent ALM Workshop in New York for another exciting discussion about the role of FTP in quantifying and managing IRR, LR and profitability.  I think everyone came to see the logic and benefits of analyzing risk and profitability (at banks, credit unions and levered FIs) in a consistent and economically robust manner.

We discussed at length the benefits of using an ALM/FTP model that allows for transaction-level FTP calculations AND which can evolve FTP rates on existing AND new business into the future across any hypothetical interest rate and liquidity cost scenarios.  Stand-alone FTP systems generally fail in this regard, but well-designed ALM models should handle this with ease.  Coupled with dynamic behavioral models which naturally support the calculation of FTP rates, this alignment allows for the comparison of the (slope of the) risk profile of the FI with that of the mismatch center which is necessary to prove that the business units have been immunized from IRR and LR, risks over which they otherwise have no control.

I hope to see you this coming week at my NMD Workshop in London! 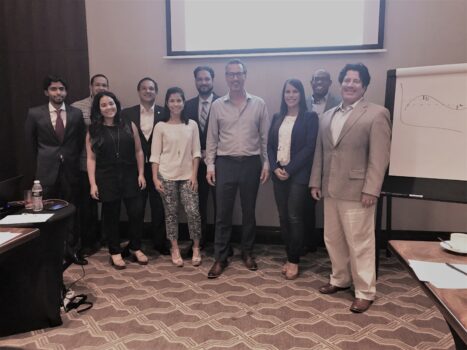 Wow, I had an amazing time at my ALM workshop in Santo Domingo (and in Punta Cana afterward!).  I want to thank all the delegates (representing all the major banks from the DR) who participated.  It was an honor to share with them my vision for a comprehensive risk and profitability management framework.

Its interesting that in a country WITHOUT a functioning interest rate swap market and with a very illiquid and short term debt market that banks recognize the importance of FTP more than most do in the US.  I believe this is the case because interest rates and the cost of liquidity are highly volatile which severely challenges the computation and analysis of business segment and product-level earnings.  In contrast, in the US, the lack of rate and liquidity spread volatility has created a sense of complacency at most FIs; low volatility makes it relatively easy to forecast earnings no matter how simplistic or illogical the margin attribution process.   When volatility returns to rate and liquidity markets, there will be many FIs that will be surprised by the impact this has on earnings.

The Fed (the regulatory side) should be careful of the unintended consequences of what the Fed (the monetary policy side) has done.  They and the OCC published their first and only guidance on FTP in 2016 (OCC 2016-7a).  It is technically only applicable to banks with total assets in excess of $250 bln (about a dozen firms); I suppose it doesn’t matter that smaller banks should not be able to quantify how much money they make from IRR and LR.  Regulators mistakenly believe that FTP is only about dividing up the earnings pie and has nothing to do with risk recognition.  Once you realize that FTP quantifies how much an FI makes by taking IRR and LR, its not a stretch to see that if IRR- and LR-related earnings are understated (at most banks the overwhelming tendency is to overstate lending and deposit gathering margins), management can be easily deluded into thinking that it has little exposure to IRR and LR.

In the workshop, we also discussed methods of imputing a base funding curve and a liquidity spread curve.  While this remains a material challenge for all the banks in the DR (and many other LatAm countries as well), I believe that these rates can be reasonably estimated.  Perhaps the systemic benefits of having a clearly-defined interest rate swap curve and a senior, unsecured term funding curve will compel the central bank and treasury department to instigate development of deep and efficient markets for risk transfer.

I am looking forward to working with the banks there to design, develop and implement robust analytical frameworks for risk and profitability.  No doubt, it will be much fun.

Of course, I am also looking forward to returning to Punta Cana where I can doodle in the sand. 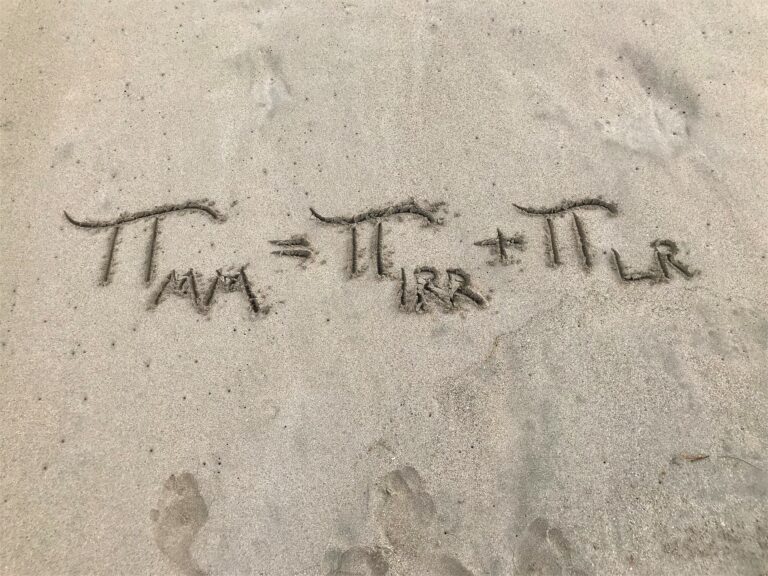 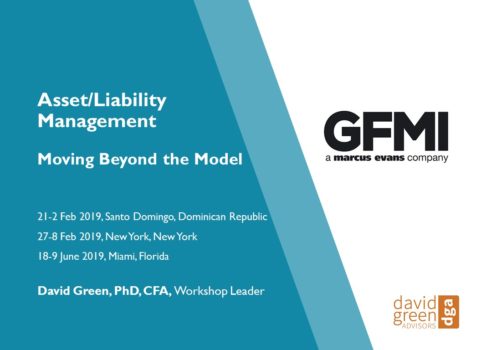 As interest rates moved higher last year, many depository institutions found that they were not well-prepared for the impact on earnings.  A key reason was the unexpected increase in deposit costs that occurred as the excess liquidity that characterized much of the post-crisis era quickly evaporated.

Now that the economy is slowing, and the yield curve has flattened, a different kind of margin pressure is being felt, although no less challenging.  As competitors get more aggressive in trying to sustain above-market balance sheet growth, the need for a very granular and robust margin attribution process is greater than ever.

In this exciting class, we discuss these and other emerging challenges in the banking industry.  Drawing on 25 years of experience working with financial institutions from around the globe, I describe a comprehensive approach to risk and profitability management that has proven robust to the dynamics of the business cycle.

I will discuss how to develop and manage ALM models which provide accurate and dynamic measures of interest (IRR) and liquidity risk (LR).  This is accomplished with a well-designed FTP framework which transfers IRR and LR from the lending and deposit gathering business units to a central mismatch center.  (SPOILER ALERT: FTP is mandatory, it must be done in a very specific and deliberate way, it belongs in the ALM model and it will probably upset the narrative of how your company makes money!)

I will also showcase my non-maturity deposit (NMD) model which produces estimates of duration and liquidity as well as FTP rates which reflect these value characteristics in a way that logically rewards deposit gatherers for the economic value they generate AND stabilizes their margins.

It’s a packed agenda and I guarantee that you will leave inspired to elevate the practice of risk and profitability modeling at your firm!

For more information about the workshop, see Asset Liability Management: Moving Beyond the Model.

Past delegate testimonials can be found here and if you have any questions, please feel free to send me a message.

I hope to see you there